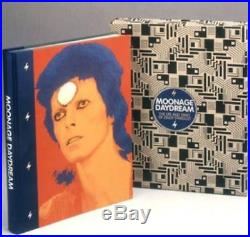 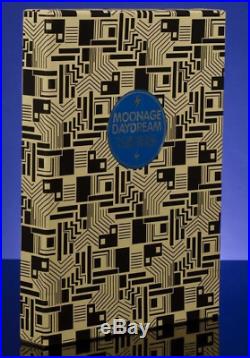 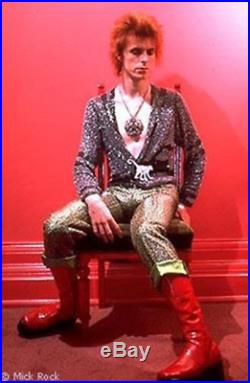 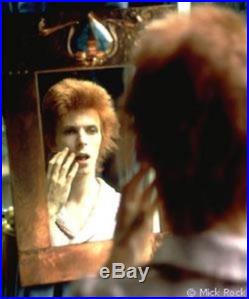 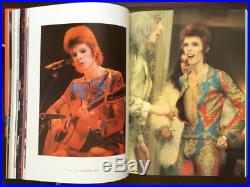 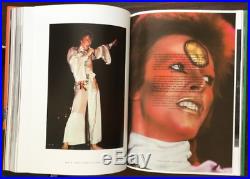 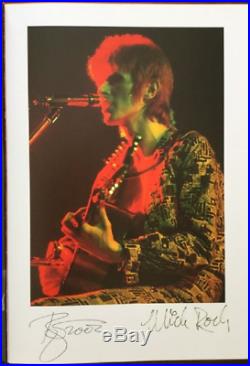 STILL HOUSED IN PACKING BOXES. ONLY OPENED TO VERIFY CONTENTS. THIS IS NUMBER 370 Signed by: David Bowie, Mick Rock Paper: 14 paper stocks, including clear acetate, trace leaves and a variety of colours and textures. Binding: 1/4 Blue Leather, Photograph Foiled on Front and Rear, Gold/Silver blocking. ALL PHOTOS ARE STOCK ASA WE HAVE NEVER REMOVED THE BOOK FROM IT’S BOX EXCEPT TO CHECK LIMITED EDITION# Page size: 250mm x 350mm 346 pages 659 images Featuring: David Bowie Era: 1970s Genre: Music Photographer: Mick Rock Though all Genesis editions are lovingly produced to the very highest standards of design, printing and binding, Moonage Daydream is probably our most ambitious production ever. This large-format volume (page size 350mm x 250mm) is printed on fourteen different paper stocks, including clear acetate, trace leaves and a variety of coloured and textured papers. The main paper stock is matt art 200gsm. The 346 pages are printed in colour throughout and edged in silver. Of the 2500 copies, copies numbered 251 to 2500 are quarter-bound in blue leather with one of Mick Rock’s photographs of David printed and foil-blocked in gold and silver on the front and back boards (this binding is pictured above). The design on the cloth-covered Solander box is a faithful recreation of the fabric pattern David wore on the cover of the Ziggy Stardust LP. The lid also features a blue leather label with the title blocked in gold and silver. As part of David Bowie’s Ziggy 2002 project Genesis Publications are publishing the much anticipated autographed limited edition book by DAVID BOWIE and MICK ROCK. It will be the first fully authorised David Bowie/Mick Rock limited edition book ever produced and will be called Moonage Daydream – The Life and Times of Ziggy Stardust. This will be a once-only opportunity to own a unique piece of the Ziggy Stardust legend. This beautifully produced edition will be strictly limited to 2,500 copies, each personally signed by David Bowie and Mick Rock and individually numbered. Moonage Daydream – The Life and Times of Ziggy Stardust will be published in July 2002 to mark the thirtieth anniversary of the release of the original album. Genesis Publications is an independent British company specialising in publishing signed, numbered, craftsman-bound limited edition books produced to the highest standards in the tradition of the private press. Founded in 1974, it has become the world’s leading limited edition publisher in the field of modern music. MOONAGE DAYDREAM: THE LIFE AND TIMES OF ZIGGY STARDUST is a collaboration between David Bowie and photographer Mick Rock. Published to coincide with the 30th anniversary of the Ziggy Stardust LP’s original release, MOONAGE DAYDREAM is David Bowie’s first ever book and the ultimate authorised piece of Ziggy Stardust legend. David Bowie’s sharp, often humorous text discusses the origins of this fascinating stage persona, comments on Mick Rock’s photographs, and overall gives unprecedented insight into Ziggy’s stratospheric two-year career. The last word on the subject of Ziggy Stardust… Few books are this lovingly produced… Genesis Publications, the leading practitioners of craftsmen-produced coffee-table extravaganzas. ” GQ, June 2003 “Simply beautiful” Elle (Germany, Austria and Switzerland), April 2003 “You’re a fool to miss out” Mojo, April 2003 “Another limited edition masterpiece from England’s Genesis Publications… [which] features a 15,000-word text by Bowie, who’s hardly ever gone on record, certainly not at such length and with so much detail, about Ziggy and the glam era. ” The Washington Post “An extravagant coffee-table book that collects Mick Rock’s photographs of the chameleon rock star as Ziggy Stardust… There is more than enough for both the casual Bowie fan and the obsessive. ” The Observer, January 2003 “The closest we’ll ever get to a straight-up Bowie autobiography but who’d ever want anything straight-up from Bowie? ” Rolling Stone, September 2012 “This is a book of extraordinary photographs. David Bowie Page size: 250mm x 350mm 346 pages 659 images Featuring: David Bowie Era: 1970s Genre: Music Photographer: Mick Rock AGAIN, THIS SET IS BRAND NEW AND HAS ONLY BEEN OPENED TO VERIFY CONTENTS AND CHECK THE LIMITED EDITION NUMBER. ABSOLUTELY THE FINEST COPY AVAILABLE IN PRISTINE CONDITION. WRAPPED IN ORIGINAL NUMBERED BUTCHERS PAPER AND HOUSED IN ORIGINAL CARDBOARD BOX. WE DO NOT HAVE PHOTOS OF THE EXACT ITEM HAS WE DO NOT EVEN WISH TO HANDLE THE BOX TO KEEP IT IN FINGERPRINT FREE CONDITION. PLEASE USE THE LINK ABOVE FOR DETAILS! ITEM WILL BE INSURED FOR FULL AMOUNT. Track Page Views With. Auctiva’s FREE Counter. The item “DAVID BOWIE Moonage Daydream Mick Rock BOOK Rare Signed Limited Edition #370 Gen” is in sale since Monday, April 1, 2019. This item is in the category “Books\Antiquarian & Collectible”. The seller is “soundnlightindustry” and is located in Phoenix, Arizona. This item can be shipped worldwide.