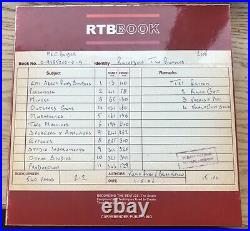 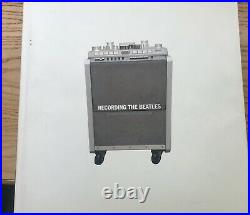 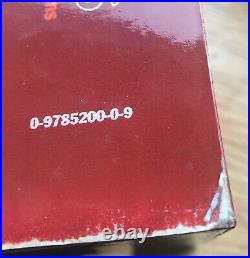 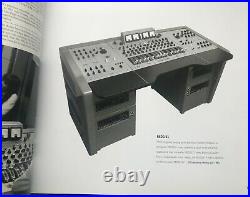 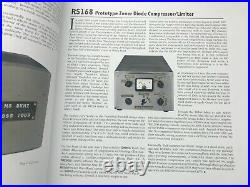 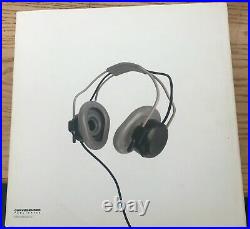 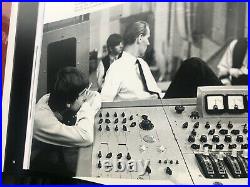 A detailed look at every piece of studio gear used, full explanations of effects and recording processes, and an inside look at how specific songs were recorded. This book is a must-have for any Beatles fan or recording engineer with incredible detail. Hardcover, 11″ x 11″, 540 pages, over 500 photos and illustrations, colour and black and white, includes slipcase designed to look like a multitrack tape box. Some of what appears to be wear on the box is actually simulated. The book’s full title is Recording The Beatles: The Studio Equipment and Techniques Used To Record Their Classic Albums. It addresses the technical side of The Beatles’ sessions and was written with the assistance of many of the group’s former engineers and technicians. The book looks at every piece of recording equipment used at Abbey Road Studios during the Beatles’ sessions, including all microphones, outboard gear, mixing consoles, speakers, and tape machines. Each piece is examined in great detail, and the book is illustrated with hundreds of full colour photographs, charts, drawings and illustrations. How the equipment was implemented during the group’s sessions is also covered. The effects used on the Beatles’ records are addressed in great detail, with full explanations of concepts such as ADT and flanging. The Production section of the book looks at the group’s recording processes chronologically, starting with their “artist test” in 1962 and progressing through to their final session in 1970. The book contains several rare and unseen photos of the Beatles in the studio. The studio personnel and the studio itself is examined. The authors spent over a decade researching the subject matter and offer up their findings in exhaustive detail. The 540-page hardcover book has been highly praised not only for its massive scope, but also for its presentation. The “Deluxe” version, released in September of 2006, was housed in a replica EMI multi-track tape-box, complete with faux time-worn edges. Rather than a listing of the tape’s contents, the back of the box featured the book’s contents, hand-written by former Beatles tape-op and engineer, Ken Scott. The book has been critically praised by recognized Beatles authority Mark Lewisohn (who also contributed the book’s Foreword), The New York Times, Mojo (magazine) (which gave it 5 stars), Beatles engineers Norman Smith, Ken Scott, and Alan Parsons, Yoko Ono, and many other individuals directly involved with the Beatles’ work. The release of the book was celebrated in November 2006 with a party in Studio Two at Abbey Road. In attendance were most of the Beatles’ former engineers and technicians. Great overall condition apart from slight marks on box and dust jacket as shown and no pull out inserts included. Book weighs about 4.5K so its a substantial parcel! The item “RTB Recording The Beatles The Studio Equipment & Techniques Book Kehew and Ryan” is in sale since Saturday, October 31, 2020. This item is in the category “Books, Comics & Magazines\Antiquarian & Collectable”. The seller is “haddockmusic” and is located in Colintraive, Argyll. This item can be shipped to United Kingdom, Austria, Belgium, Bulgaria, Croatia, Cyprus, Czech republic, Denmark, Estonia, Finland, France, Germany, Greece, Hungary, Ireland, Italy, Latvia, Lithuania, Luxembourg, Malta, Netherlands, Poland, Portugal, Romania, Slovakia, Slovenia, Spain, Sweden, Australia, United States, Bahrain, Canada, Brazil, Japan, New Zealand, China, Israel, Hong Kong, Norway, Indonesia, Malaysia, Mexico, Singapore, South Korea, Switzerland, Taiwan, Thailand, Bangladesh, Bermuda, Bolivia, Barbados, Brunei darussalam, Ecuador, Egypt, Guernsey, Gibraltar, Guadeloupe, French guiana, Iceland, Jersey, Jordan, Cambodia, Liechtenstein, Sri lanka, Macao, Monaco, Maldives, Martinique, Nicaragua, Oman, Pakistan, Peru, Paraguay, Reunion, Saudi arabia, South africa, United arab emirates, Ukraine, Chile, Bahamas, Colombia, Costa rica, Guatemala, Honduras, Jamaica, Kuwait, Panama, Qatar, Trinidad and tobago, Uruguay, Viet nam, Cayman islands.