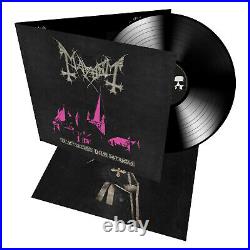 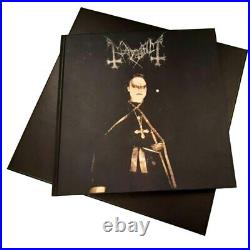 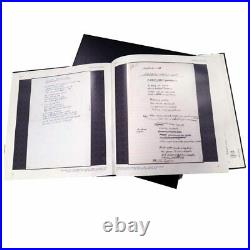 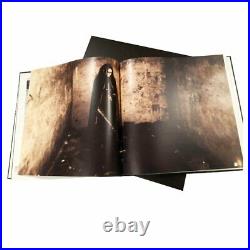 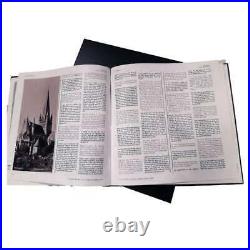 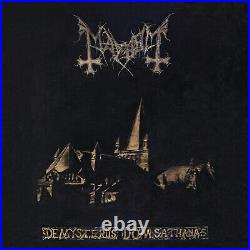 Mayhem De Mysteriis Dom Sathanas 25th Anniversary Box Set 5 LP & Book Ltd Edition. Label: Deathlike Silence Year: 2020 Format: 5 LP & Book Vinyl Record Box Set Cat: AM006LPBOX UPC: 7035538891533 Condition: New. DELUXE LIMITED EDTION VINYL AND BOOK BOX SET!!!! Here is your chance to secure this now out of print sought after collectors item in brand new sealed condition. Don’t miss out once they are gone they gone!! De Mysteriis Dom Sathanas is often considered to be the most important Black Metal album of all time. The legendary Pytten can be quoted on saying it was the next big thing after Grieg, and we couldnt agree more. The album was released on Euronymous label Deathlike Silence Productions May 24th 1994, marked as Anti-Mosh 006. We are proud to honour this timeless album with the release of the 25th Anniversary Box Set with the help and support by long time Mayhem friend Finn Håkon Rødland. The Iconic Album has been remastered for vinyl from the original DAT tapes by Solslottet Studio, with guidance from Pytten himself and approved by Hellhammer. The cover art and packaging for the first time is presented as Hellhammer originally envisioned it back in 93/94, including also the lyric scroll booklet. Also included are four additional vinyls with stunning artwork consisting of two different rehearsal sessions in Oslo from February and May 1992, taken directly from tapes Euronymous made, the instrumental rough mix from Grieghallen June 1992, and the rough mix with vocals from the tape Attila got after the vocal recordings in April/May 1993. This Box Set includes a 96 page book with a series of in depth interviews casting Light and Darkness on the recording process and the glory days of Mayhem making history in the early 90s, such as Pytten, Hellhammer, Attila, Necrobutcher, Nocturno Culto of Darkthrone, Bård `Faust Eithun of Emperor, Shagrath of Dimmu Borgir, Dr. Best of Mysticum, Steinar Sverd Johnsen of Mortem/Arcturus, Erik Danielsson of Watain, Tore Bratseth of Old Funeral, Ivar and Grutle of Enslaved, HBM Majesty of Mare/Vemod/Dark Sonority, Nergal of Behemoth, Silenoz of Dimmu Borgir and Jørgen Lid Widing (lyric scrolls). Liner notes by Finn Håkon Rødland, Metalion, Iver Sandøy of Solslottet studio, and Maniac. The book includes the original handwritten lyrics by Dead and Snorre, plus never before seen photos from the DMDS photo session, presented here for the very first time. The book also gives detailed insight into the classic cover art of Nidarosdomen. THE PAST IS ALIVE. The Original Album Re-mastered From The Original DAT Tapes Side A 1. Cursed In Eternity 4. Pagan Fears Side B 5. From The Dark Past 7. Buried By Time And Dust 8. De Mysteriis Dom Sathanas Bonus Vinyl 1 Rehearsal Oslo: Skippergata, February 10th, 1992 Side A 1. Buried By Time And Dust 2. Cursed In Eternity 3. Materialized In Stone 4. Life Eternal (Side B Blank) Bonus Vinyl 2 Studio Rehearsal Oslo: Møllergata, May 16th, 1992 Side A 1. Buried In Time Side B 5. Buried By Time And Dust 7. Cursed In Eternity 8. De Mysteriis Dom Sathanas Bonus Vinyl 3 Instrumental Rough Mix: Grieghallen, Bergen June 22nd-29th, 1992 Side A 1. Funeral Fog Side B 5. De Mysteriis Dom Sathanas Bonus Vinyl 4 Vocal Session, Grieghallen, Bergen April 30th- May 2nd 1993 Side A 1. Cursed In Eternity 2. Freezing Moon Side B 4. Your complete satisfaction is our top priority. Heavy Metal Merchant’s got your gear! We believe that a business based on customer service will surely succeed, and back every item we sell with a 100% satisfaction guarantee. Our feedback is testament to this. We treat you how we want to be treated. It’s that simple. If you aren’t happy, we aren’t happy! Every band needs fans — we need you. Thanks for shopping with us. We hope to see you again soon. Stickers, Badges & Magnets. Subscribe to our newsletter. The item “Mayhem De Mysteriis Dom Sathanas 25th Anniversary Vinyl Box Set 5 LP Book New” is in sale since Saturday, October 17, 2020. This item is in the category “Music\Vinyl Records”. The seller is “heavymetalmerchant” and is located in Warwick. This item can be shipped to Australia, North, South, or Latin America, all countries in Europe, Japan, New Zealand.