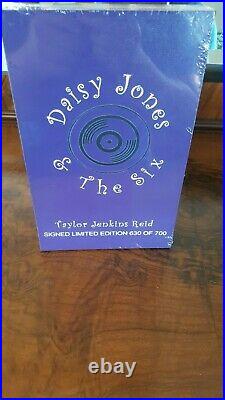 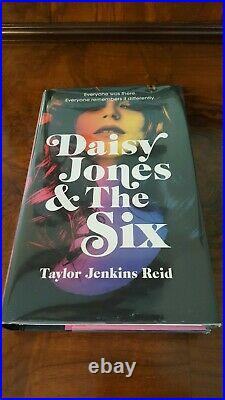 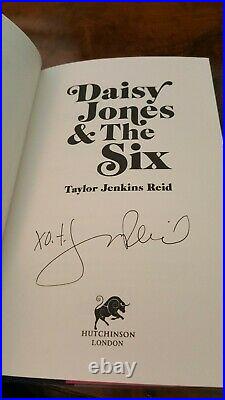 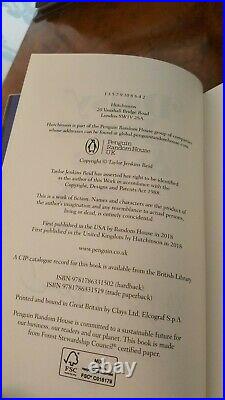 DAISY JONES & THE SIX. 2 X SIGNED EDITION BUNDLE!! BOTH BOOKS 1ST EDITIONS & SIGNED BY REID. BOOK 1: SEE THE 1ST 4 IMAGES – THIS IS THE RARE EDITION! ONLY 750 signed copies produced No. 630 – However, this is a. Special slipcased and sealed version of the Signed Limited Edition by Goldsboro Books. Less than 20 of these slipcased and sealed copies will be produced, this is one of those RARE COPIES!! The edition has been personally signed by the author directly onto the limitation page. This book includes a special matching custom slipcase produced from high quality faux leather. Each slipcase has a printing of the number to match the number of the book. BOOK 2: IMAGES 5 – 11 – SIGNED 1ST EDITION. Personally signed by the author, 1st edition & printing. A gripping novel about the whirlwind rise of an iconic 1970s rock group and their beautiful lead singer, revealing the mystery behind their infamous breakup. I devoured Daisy Jones & The Six in a day, falling head over heels for it. Daisy and the band captured my heart. Everyone knows DAISY JONES & THE SIX, but nobody knows the reason behind their split at the absolute height of their popularity. Daisy is a girl coming of age in L. In the late sixties, sneaking into clubs on the Sunset Strip, sleeping with rock stars, and dreaming of singing at the Whisky a Go Go. The sex and drugs are thrilling, but it’s the rock’n’ roll she loves most. By the time she’s twenty, her voice is getting noticed, and she has the kind of heedless beauty that makes people do crazy things. Also getting noticed is The Six, a band led by the brooding Billy Dunne. On the eve of their first tour, his girlfriend Camila finds out she’s pregnant, and with the pressure of impending fatherhood and fame, Billy goes a little wild on the road. Daisy and Billy cross paths when a producer realizes that the key to supercharged success is to put the two together. What happens next will become the stuff of legend. The making of that legend is chronicled in this riveting and unforgettable novel, written as an oral history of one of the biggest bands of the seventies. Taylor Jenkins Reid is a talented writer who takes her work to a new level with Daisy Jones & The Six, brilliantly capturing a place and time in an utterly distinctive voice. Praise for Daisy Jones & The Six. Taylor Jenkins Reid transported me into the magic of the 70’s music scene in a way I’ll never forget. The characters were beautifully layered and complex… Daisy and the band captured my heart, and they’re sure to capture yours too. Amazon Studios has recently ordered a 13-episode series of Daisy Jones & The Six that is scheduled for production later this year. This project will come from Reese Witherspoon’s Hello Sunshine and Circle of Confusion and will be a co-production between Amazon Studios and Hello Sunshine. Original music from the series will be made available exclusively through Amazon Music. This dreamy novel follows the rise and fall of an iconic band lead by the enigmatic Daisy, and it’s full of a sex, b drugs, c rock n’ roll, and d characters who you’ll wish could leap out of the page and into your life. T his novel, framed as an oral history, charts the rise of a hard-partying, iconic band in the 1970s. Daisy is an up-and-coming young singer, and after her duet with Billy, the frontman of The Six, becomes a breakout hit, she joins the band full-time. The book is a love story, too: not only of Daisy and Billy’s will-they-won’t-they romance, but also a sentimental appreciation for the era. Decades after their sudden split, members of a rock band recall their rise to fame in the 1970s-and what wrong. Taylor Jenkins Reid’s fictional tell-all will rock you. This item is in the category “Books, Comics & Magazines\Antiquarian & Collectable”. The seller is “behemothrarebooks” and is located in this country: GB. This item can be shipped worldwide.