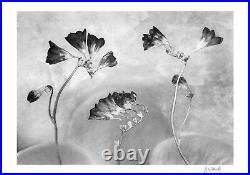 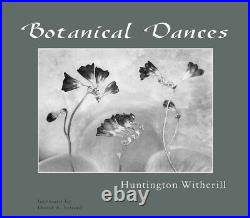 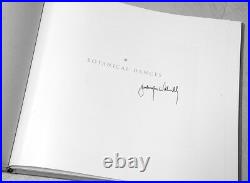 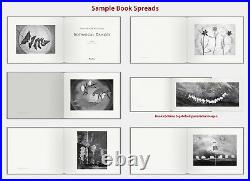 HUNTINGTON WITHERILL SIGNED 2001 BOTANICAL DANCES BOOK & ORGINAL PHOTOGRAPH. I recently asked Huntington Witherill to allow me to sell some book and print sets of his one of his more popular books. The photo chosen was the cover of the book! This book comes with an original signed and numbered Huntington Witherill 7 1/4″x10″. The limited edition image is titled “Fresias, 1991″, printed in 2018. Printed information below the photograph will easily be cropped out once matted. This signed award winning first edition hardcover book contains 104 pages, with 39 tri-tone reproductions of Witherill’s black & white photographs from the series: Botanical Dances, including 5 gatefold panorama images. A Foreword by David E. Stroud is also included. Published 2001 by LensWork Publishing. Book Dimensions: 10 3/4″x12 1/4″ – 104 Pages! Born in Syracuse, NY, in 1949, Huntington Witherill moved with his family to California, in 1953, where he began training in classical music. With intentions of eventually becoming a concert pianist, Witherill entered college as a music major in 1968, but soon became interested in the study of two-dimensional design. This shift in creative focus eventually led to a career in fine art photography beginning in 1970. Having studied photography in the early 1970’s with such notables as Ansel Adams, Wynn Bullock, Steve Crouch and Al Weber, Witherill has remained faithful to his classical roots while progressively transitioning toward a more contemporary approach to the medium. Since 1975, his work has been featured in more than one-hundred individual and group exhibitions in museums and galleries throughout the world. Indicative of a diverse approach to the medium, Witherill works in both color and black & white, and his subjects include classic landscapes, studies of pop-art, botanical still-life, urban architecture, abstracts, and digital imaging. His photographs have been the subject of three award winning hardcover monographs titled: Orchestrating Icons (2000), Botanical Dances (2002), and Photo Synthesis (2010). In 1999, Witherill was the recipient of the Artist of the Year award presented by the Center for Photographic Art, Carmel, CA. Witherill’s photographs are maintained in numerous distinguished public art collections including; the United States Department of State: Art in the Embassies, Fundacioe Van Gogh d’Arles, Arles, France, the National Museum of Modern Art, Kyoto, Japan, the Everson Museum of Art, Syracuse, NY, the Santa Barbara Museum of Art, Santa Barbara, CA, and the Monterey Museum of Art, Monterey, CA, among others. Since 1975, he has also taught photography for a variety of institutions and workshop programs throughout the United States, including the University of California, the Friends of Photography, the Center for Photographic Art, the Oklahoma Arts Institute, and the Ansel Adams Gallery. Huntington Witherill lives in Central California on the Monterey Peninsula. The item “HUNTINGTON WITHERILL SIGNED 2001 BOTANICAL DANCES BOOK & ORGINAL PHOTOGRAPH” is in sale since Wednesday, May 30, 2018. This item is in the category “Books\Antiquarian & Collectible”. The seller is “russlevin” and is located in Monterey, California. This item can be shipped worldwide.