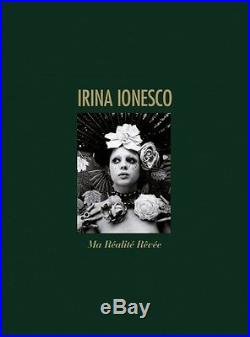 First Editions / Signed. HERE WE HAVE BRAND NEW, LIMITED EDITION SIGNED COPY OF. Ma Realite Revee by IRINA IONESCO – Limited Edition of 450 copies. Hand Signed by IRINA IONESCO herself. The book has five different themes: Fafa Métamorphose, Miroirs, Le Nu, LÉrotisme, La Théâtralité and La Mort dans lArt. Dubbed the grande dame of photography erotica by The Independent, Ionescos work is a tribute to femininity in all its meant theatrical excesses. Ionesco, who lacked technical knowledge but admired highly skilled luminaries such as Cecil Beaton, and later Robert Mapplethorpe, achieved to turn this initial problem into an advantage. It allowed her to create her own visual language unburdened by conventions and mainly based on alternative modes of lighting (candles) and exposure (putting a 400 ASA film on 800 ASA). From her first experiments with the medium she also kept the habit of using a Nikon F camera, the same model she had received as a Christmas gift from her lover, Belgian COBRA artist Corneille, in 1964. Ionescos models often look directly into the lens defiantly. The dolls they hold and the fetishistic accessories they wear work to heighten their nudity as they stand, sit or lay down. They seem to play roles in clichéd fantasies. Some of the props and dresses hint at exotic cultures whereas backgrounds might remind one of Victorian photography settings, and hairdos of Rossettis paintings. Alice in Wonderland meets Richard Avedon, Orientalist painting and Symbolism. As French surrealist Andre Pieyre De Mandiargues once stated: Irina Ionescos sexual world belongs to a place where there is no licence to touch. It is the world of dreams. The book contains contributions by dr. Matthias Harder, chief curator of the Helmut Newton Foundation in Berlin, and Pierre-Paul Puljiz, a French film producer, documentary filmmaker, and writer. The first offers a art-historical appreciation of Ionescus work and places it in the photographical tradition. Puljiz text presents a more biographical take on Irina Ionescos career. Tracing her life through family trauma, heartbreaking separation, abandonment and forced exile, it is clear that a singular oeuvre finds it origins in a singular life. The rest of the book is full of high quality reproductions of the photographs. Book Size (in cm): 33.2 x 2 5 x 2.5. Hardback, linnen cover, golden lettering and edges. Thank you for looking! You can pay by: 1. The item “IRINA IONESCO Ma Realite Revee RARE Signed Limited Edition HB Photo Book @NEW@” is in sale since Tuesday, November 29, 2016. This item is in the category “Books, Comics & Magazines\Magazines\Photography”. The seller is “sauliusst” and is located in Sidcup, London. This item can be shipped worldwide.