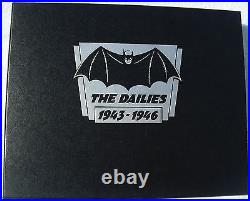 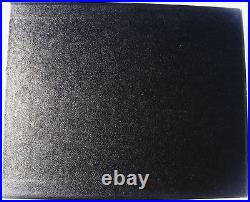 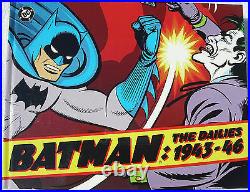 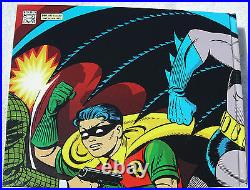 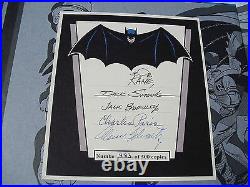 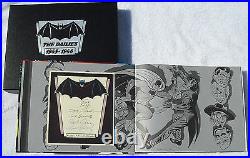 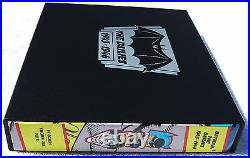 Batman: The Dailies 1943 – 1946 Signed & Numbered Hardcover w/ Slipcase Limited to 500. Writers: Don Cameron, Bill Finger, Bob Kane, Jack Schiff, & Alvin Schwartz. Cover by: Dick Sprang. This beautiful deluxe hardcover book with slipcase collects the first newspaper comic strips appearance of, one of the most famous characters creations in comic book history, Batman and Robin. Kitchen Sink Press, in cooperation with DC comics published these rare strips for the first time since the end of WW 2. First appearing as three separate trade paperbacks these books were then combined to form this very low printing deluxe hardcover collection. The Batman newspaper strips themselves were considered the rarest Batman comics ever as they were never reprinted before prior to having been collected in the trade paperback or hardbound editions. Due to the wartime paper restrictions during World War II, the strip was sparsely circulated in the pages of newspapers across America. By only a few dailies and were not readily available to a vast national audience. Subsequently, this rarely seen work of the first four years of the classic Batman strips is of particular historical and artistic significance to Batman fans and comics enthusiasts alike. Now, Bob Kane’s Batman, one of the most enduring and beloved comic book characters in comic book history, is presented in an extravagant, generously-sized collection of the first four years of the classic Batman strips, exactly as written and illustrated by the Caped Crusader’s most famous writers and artists. These shadowy black-and-white newspaper strip dailies by Bob Kane, Bill Finger, Charles Paris and others showcase Batmans earliest incarnation, before he became an internationally beloved TV and movie icon. Also includes an early appearance of Batmans arch-nemesis, the Joker. Batman and the Boy Wonder as they once again do battle with both common thugs and outrageous villains in order to save Gotham City from plot after evil plot. This deluxe collection is A Must Have for every Batman Fan. The first four years of the classic Batman and Robin comics exactly as written and illustrated by the strips most famous writers and artists. Signatures of Bob Kane, Dick Sprang, Jack Burnley, Charles Paris & Alvin Schwartz. Numbered out of 500. Rare promotional materials & rare photographs. Beautiful black slipcase with silver glit. Publishers: DC Comics / Kitchen Sink Press. Pages, HC, 11.25″ x 9″. Collectible Entertainment note: Rare Deluxe Signed & Numbered Limited Hardcover w/ Slipcase New & Unread. A must have for any serious Batman and/or Bob Kane collector / enthusiast. A fun & entertaining read. Please check out all my other Batman or Rare Hardcover listings by visiting my store and typing Batman or Rare HC in the store search engine. Track Page Views With. Auctiva’s FREE Counter. The item “Batman The Dailies Hardcover Slipcase Ltd 500 Rare HC Numbered Signed Bob Kane” is in sale since Saturday, October 30, 2010. This item is in the category “Books & Magazines\Books”. The seller is “collectible_entertainment” and is located in Palm Bay, Florida. This item can be shipped worldwide. 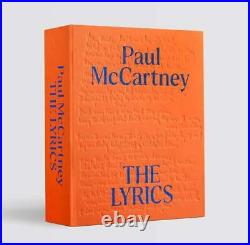 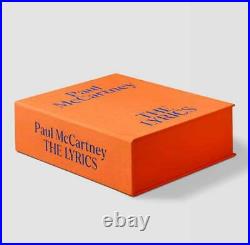 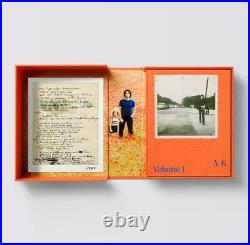 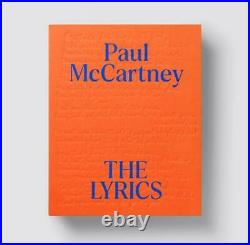 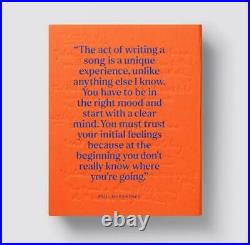 A special limited edition of 175 numbered copies hand-signed by Paul McCartney with an exclusive print of a lyric sheet. The item “The Lyrics 1956 to the Present SIGNED by Paul McCartney Limited Edition Rare” is in sale since Thursday, November 4, 2021. This item is in the category “Books, Comics & Magazines\Books”. The seller is “joesephalo” and is located in Swansea. This item can be shipped to all countries in Europe, United States.