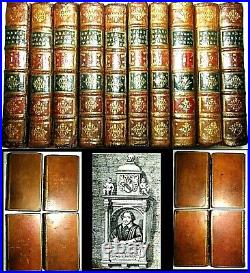 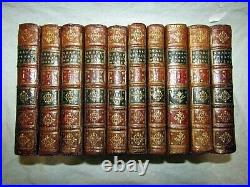 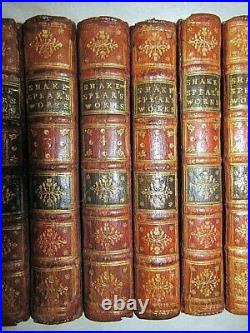 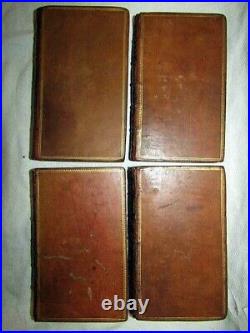 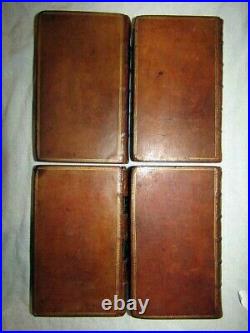 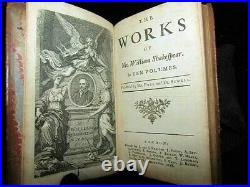 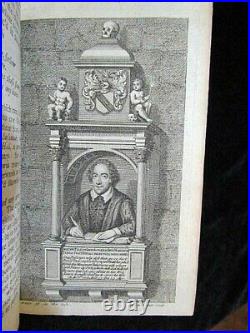 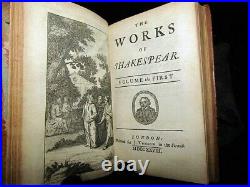 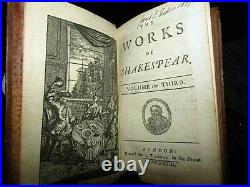 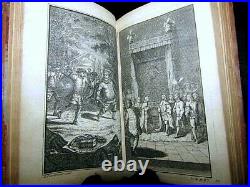 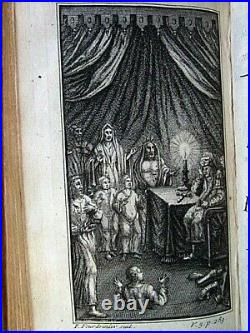 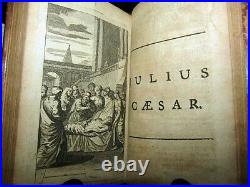 THE WORKS OF SHAKESPEAR. 1728; William Shakespeare, Alexander Pope, Dr. Sewell; 2nd Pope Edition, 2nd Issue, Believe 8th Shakespeare Edition Overall; London, J. Knapton, Jacob Tonson; Each About 350-450 Pages; Illustrated by P. Fourdrinier; Full Leather; w4.2″xh6.7″; Extremely Rare! 10 Lovely full leather cover designs with pretty gold borders to both sides, gorgeous gold floral bindings with faint maroon/dark green labels, pretty woodcut headings/endings/initials, Nine Excellent frontispieces, another Shrine plate, with a Beautiful Plate to each Selection and Lots of Legendary Classics, In early modern English on handmade paper! Complete in Ten Volumes; Won’t Find This Set Around Anywhere; One of the Rarest Shakespeare Sets Available; This is the Only Complete Set on the Internet; Was Originally an 8 Volume Set, then a Supplementary Vol. 9 added, then reissued in 10 Volumes; You would be lucky to find one volume of this set, let alone a complete set! William Shakespeare (26 April 1564 23 April 1616) was an English playwright, poet, and actor, widely regarded as the greatest writer in the English language and the world’s greatest dramatist. He is often called England’s national poet. And the “Bard of Avon” (or simply “the Bard”). His extant works, including collaborations. Consist of some 39 plays. Two long narrative poems. And a few other verses, some of uncertain authorship. His plays have been translated. Into every major living language. And are performed more often than those of any other playwright. They also continue to be studied and reinterpreted. This set is the second edition of Shakespeare’s works edited by Alexander Pope. In the first edition, completed in 1725, Pope’s extremely liberal emendations to the Works elicited Lewis Theobald’s reprimand in. Shakespeare Restored: or, a Specimen of the Many Errors. Pope in his Late Edition. Pope acknowledged Theobald’s correctness by quietly incorporating many of the “restorations” in this second edition, but publicly making Theobald the King of Dullness in his. Alexander Pope (21 May 1688 30 May 1744) is regarded as one of the greatest English poets, and the foremost poet of the early eighteenth century. He is best known for his satirical and discursive poetry, including The Rape of the Lock. And An Essay on Criticism. As well as for his translation of Homer. After Shakespeare, Pope is the second-most quoted writer in the English language per The Oxford Dictionary of Quotations. Some of his verses having even become popular idioms in common parlance e. Damning with faint praise. He is considered a master of the heroic couplet. Tempest ; Midsummer night’s dream ; Two gentlemen of Verona ; Merry wives of Windsor ; Measure for measure. Comedy of errors ; Much ado about nothing ; Merchant of Venice ; Love’s labour’s lost ; As you like it v. Taming of the shrew ; All’s well that ends well Twelfth-night ; Winter’s tale ; King Lear v. King John ; King Richard II ; King Henry IV ; Henry V. King Henry VI ; King Richard III v. King Henry VIII ; Timon of Athens ; Coriolanus ; Julius Caesar v. Antony and Cleopatra ; Titus Andronicus ; Macbeth ; Troilus and Cressida v. Cymbeline ; Romeo and Juliet ; Hamlet ; Othello v. Pericles ; London prodigal ; Thomas, Lord Cromwell ; Sir John Oldcastle ; Puritan ; Yorkshire tragedy ; Locrine v. Venus and Adonis ; Tarquin and Lucrece ; Poems. Some wear to edges/hinges/boards/spines, some glue/color to hinges and color added to ends of spine, vol. 8 looks like a newer rebinding, but still old; some marks to boards, missing a little leather to some corners/ends of spines. Well worth rebinding, few signatures, some light blemishing/age toning throughout, all hinges are together/visual cracking, would handle with care, text blocks are delicate, would handle with care. One frontispiece trimmed/laid down on paper, few other pencil notes to blanks. I like to send off after a week or so. Bubble wrapped and then wrapped in cardboard and mailed in a bubble wrapped envelope in most cases. The item “1728 COMPLETE DRAMA WILLIAM SHAKESPEARE A POPE 10V BOOK SET HAMLET ROMEO MACBETH” is in sale since Thursday, November 26, 2020. This item is in the category “Books\Antiquarian & Collectible”. The seller is “rogabooksllc” and is located in Boca Raton, Florida. This item can be shipped worldwide.