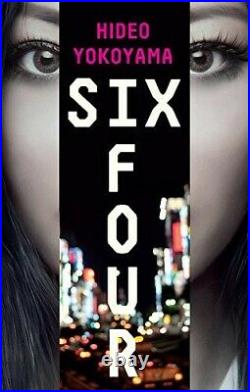 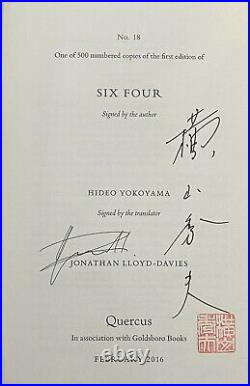 HIDEO YOKOYAMA: 64: New Unread 1st edition Double Signed Numbered 18/500. SIGNED Limited Edition 18of 500 by Hideo Yokoyama (author) & Jonathan Lloyd-Davies (translator). Shortlisted for the 2016 CWA International Dagger. THE NIGHTMARE NO PARENT COULD ENDURE. THE CASE NO DETECTIVE COULD SOLVE. THE TWIST NO READER COULD PREDICT. For five days in January 1989, the parents of a seven-year-old Tokyo schoolgirl sat and listened to the demands of their daughter’s kidnapper. They would never learn his identity. They would never see their daughter again. For the fourteen years that followed, the Japanese public listened to the police’s apologies. They would never forget the botched investigation that became known as’Six Four’. They would never forgive the authorities their failure. For one week in late 2002, the press officer attached to the police department in question confronted an anomaly in the case. He could never imagine what he would uncover. He would never have looked if he’d known what he would find. An addictive read, it is an education about Japan, its police and its society, and. Simply one of the best crime novels I have ever read. (David Peace) A classic plot about a decent cop painstakingly uncovering corruption suddenly turns into. One of the most remarkable revenge dramas inmodern detective fiction. Crime fiction aficionados constantly search for the next big thing, and this remarkable epic may just fit the bill. It is like nothing you haveever read in the genre. Told in a narrative voice that is truly unique. It’s very different, in tone, narrative and style, from almost anything out there. The twist and the pay-off are worth the wait. A huge hit in Japan and it’s easy to see why. Steadily gathers menace and power until it becomes. The plot would grip in any language. Not just a police procedural but a guide book to Japan. There’s much talk these days of binge viewing; here is. Tale, which reads beautifully in Jonathan Lloyd-Davies’s translation. A monument to the idiosyncrasies of Japanese bureaucratic life. Than it is a simple detective story. Slow building, meticulous in its insistence on unfolding all the procedural elements of a Japanese crime investigation and its political ramifications, this is a novel that. Insidiously grows on you until you are fully captive of its narrative flow and can’t put it down. It unfurls like a flower in the spring sunlight, steadily increasing its grip as it does so. Is the literary equivalent of a good TV box set such as Danish TV series. Totally fascinating, revealing as much about Japan and its people as about the mystery at its heart. Unable to put the book down, I read until 3am every night for a week, the shadows under my eyes growing darker with every hour. But I was rewarded with a shocking conclusion. And deserves to sell at least as well over here as it did in Japan. This item is in the category “Books, Comics & Magazines\Books”. The seller is “2aflower” and is located in this country: GB. This item can be shipped to United Kingdom.